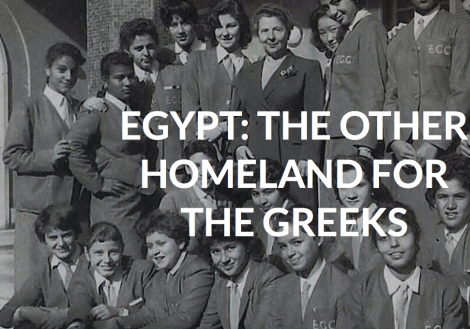 A poignant tale of Egypt’s once-thriving Greek community told by (Egyptian Greeks) who have returned after many decades to capture a (fainting) glimpse of their once old homes, neighborhoods, businesses and friends; and to bid farewell to their other homeland; Egypt.
The 1956 class in EGC School, Alexandria. At that time most non-Egyptian EGC girls and their families had fled Egypt – however the Greek community, many of them in the photo, was the last to leave
I personally was moved by the Egyptian Greeks memories and their sincere feelings in the documentary. For me the film is not just about the once large Greek community in Egypt and especially in Alexandria, but it is a sort of a reminder, though somehow painful, of how tolerant and diverse the Egyptian society was during the 19- to the mid-20th century.

For an Alexandrian like myself, I long, like so many Egyptian Greeks, for those good old days when Alexandria was a real cosmopolitan city, and where multi-ethnic communities co-existed in harmony and enriched the economy and culture of the ancient Mediterranean city.