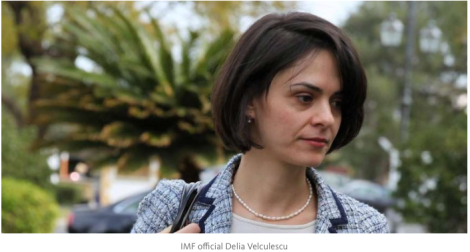 IMF plots new “credit event” for Greece
Neoliberalism does not give a shit, Part II

Originally published https://medium.com
The International Monetary Fund has been caught, red handed, plotting to stage a “credit event” that forces Greece to the edge of bankruptcy, using the pretext of the Brexit referendum.
No, this is not the plot of the next Bond movie. It is the transcript of a teleconference between the IMF’s chief negotiator, Poul Thomsen and Delia Velculescu, head of the IMF mission to Greece.
Released by Wikileaks, the discussion took place in Athens just before the IMF walked out of talks aimed at giving Greece the green light for the next stage of its bailout.
The situation is: the IMF does not believe the numbers being used by both Greece and Europe to do the next stage of the deal. It does not want to take part in the bailout. Meanwhile the EU cannot do the deal without the IMF because the German parliament won’t allow it.
As they bicker about the numbers, Thomsen and Velculescu are heard mulling whether to suppress the IMF’s next report on whether Greek debt is sustainable. Thats important because the IMF will only sign up to a deal that involves debt relief, and the Germans will not.
Then Thomsen drops the bombshell:
THOMSEN: What is going to bring it all to a decision point? In the past there has been only one time when the decision has been made and then that was when they were about to run out of money seriously and to default. Right?
VELCULESCU: Right!
THOMSEN: And possibly this is what is going to happen again. In that case, it drags on until July, and clearly the Europeans are not going to have any discussions for a month before the Brexits and so, at some stage they will want to take a break and then they want to start again after the European referendum.
Velculescu says they should try and do something in April. Thomsen replies:
THOMSEN: But that is not an event. That is not going to cause them to… That discussion can go on for a long time. And they are just leading them down the road… why are they leading them down the road? Because they are not close to the event, whatever it is.
VELCULESCU: I agree that we need an event, but I don’t know what that will be.
So let me decode. An “event” is a financial crisis bringing Greece close to default. Just like last year, when the banks closed, millions of people faced economic and psychological catastrophe.
Only this time, the IMF wants to inflict that catastrophe on a nation holding tens of thousands of refugees and tasked with one of the most complex and legally dubious international border policing missions in modern history.
The Greek government is furious: “we are not going to let the IMF play with fire,” a source told me.
But the issue is out of Greek hands. In the end, as Thomsen hints in the transcript, only the European Commission and above all the German government can decide to honour the terms of the deal it did to bail Greece out last July.
The transcript, though received with fury and incredulity in Greece, will drop like a bombshell into the Commission and the ECB. It is they who are holding E300bn+ of Greek debt.
It is the whole of Europe, in other words, that the IMF is conspiring to hit with the shock doctrine.
It’s clear from the transcript that the IMF has become a playground for neoliberal fantasists.
To fantasise about inflicting yet another near bankruptcy on a teetering democracy reveals levels of insouciance about the welfare of human beings and the sovereignty of states incompatible with a democratic organisation.
It proves, yet again, that the core of the economic doctrine that guides the global elite is the determination not to “give a shit” about real people, but to impose the doctrine even at the cost of state failure.