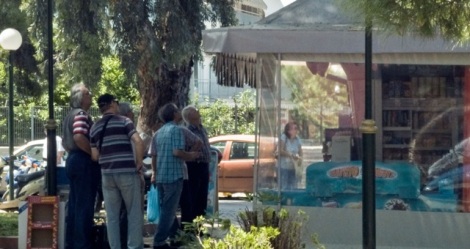 The installation Athenians is a deconstructed documentary that uses visual and audio material recorded in Athens in 2014.
Main focus is set on the classical philosophical controversy over free

will and social determinism.
Presented as two distinct elements of the installation, the video-documentation of urban landscapes and the verbal testimonies of Athenians do occasionally find meeting points.
A general question about the important of politics and the social environment in the formation of the individual is posed, and as urban landscapes are shown, a virtual discussion between all participants is created. A discussion about the development of identity, and the part played by politics and social environment in the formation of an individual, as a citizen and as a human.
The work Athenians was financially supported be the Sparkasse Förderprogramm, Sk-Stiftung Kultur