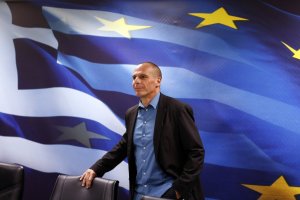 This comes amid rapidly evolving talks over how Greece will climb out of its debt crisis.

At the center of these dealings is Greek finance minister, Yanis Varoufakis. He’s the voice and face of the Greece’s economic situation today.

His position on what to do about Greek’s crushing debt seems to change daily, but that seems to be working to his advantage.

Varoufakis, who describes himself as a libertarian Marxist, became the finance minister after the far-left Syriza party won a resounding victory in Greek elections in January.

He looks the part. In photos of his negotiations with various European leaders over the weekend, he appeared with an untucked shirt and no tie. It seemed to convey a message: I don’t play by your rules.
Varoufakis’ academic specialty is game theory, the study of strategic decision-making. James Galbraith, a fellow UT Austin professor, told Bloomberg that Varoufakis was as knowledgeable “as anyone on the planet” and would “be thinking more than a few steps ahead” in negotiations with Greece’s creditors, known as the troika (the International Monetary Fund, the European Central Bank, and the European Commission).

But if that’s true, Varoufakis doesn’t come across as coldly calculating. He comes across as rash. Right out of the gate, Greece declared it would not negotiate with the troika, and Varoufakis wrote a post on his personal blog blasting the media for getting his motives wrong.

At that point, people started worrying that Greece had gone off the rails. Varoufakis seemed to be pursuing what is known in strategy as a madman theory. Basically, if you act crazy enough, your enemy will fear you and give you more of what you want.

But over the weekend Varoufakis embarked on a trip around Europe in which he met with various leaders and seemed to start doing what he said he wouldn’t: negotiating. Or at least pre-negotiating. In France, he gained some support for his cause.

Tuesday morning, Varoufakis proposed a swap instead of a haircut on the debt that is drowning Greece. From the FT:

Attempting to sound an emollient note, Mr. Varoufakis told the Financial Times the government would no longer call for a headline write-off of Greece’s €315bn foreign debt. Rather it would request a “menu of debt swaps” to ease the burden, including two types of new bonds.

This might be appealing to the Germans, who are opposed to a haircut.

It seems as if Varoufakis’ strategy — bold, a little crazy, but willing to negotiate — might just get him somewhere. On the other hand, it could backfire spectacularly. Either way, the fate of the euro project seems to be at least partially in the hands of a tieless, bold, radical economist.