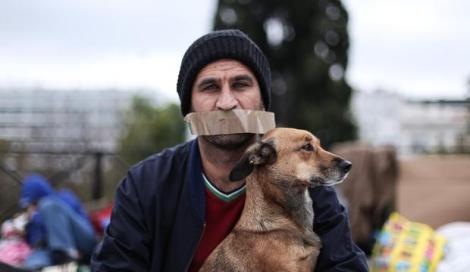 Now that Syriza has been elected to power in Greece, what will this mean for the country΄s migration crisis? Thousands of migrants, many of them refugees from the war in Syria, continue to be stranded in Greece with countless instances of abuses documented by human rights organizations.
by Behzad Yaghmaian published at The Press Project.net
Friday 30 January 2015

On January 25th, Greek people showed Europe and the rest of the world a peaceful approach to fighting austerity. They shunned the violence of The Golden Dawn and rejected the old and corrupt centrist parties. The electoral victory of Syriza promises to be a turning point not only in Greece but also in other European countries grappling with the negative consequences of austerity.

However, as many in the world join the Greek people in celebrating this historic victory, serious concerns remain about the fate of immigrants and refugees trapped in Greece, and the future of migration policy in the EU. Although Syriza’s declared positions are promising, changing migration policy and respecting the human rights of migrants will be constrained by a myriad of local and EU-wide obstacles.

In recent years, Greece has become a magnet for migrants and refugees from Africa and the Middle East on their way to other countries in Europe. The failure of the Arab Spring only increased the number of desperate refugees arriving in Greece. Meanwhile, Greek migration policy and state practices towards immigrants sharply deteriorated. Occasional abuses and human rights violations became de facto policy. Long-term detention of those with expired papers, beatings in police custody, and the pushing back of boats carrying immigrants became the new normal. An estimated 80% of migrants attempting to enter Greece in the past couple of years were pushed back.

The harsh migration policy has had the support of many Greeks, including some electorates behind Syriza’s victory. The unemployed youth and the impoverished pensioner struggling to comprehend their dire predicament see migrants a main culprit for their dire conditions.

Doing research on conditions of migrants and refugees in Greece before and after austerity I found wide support for immigration control.Austerity helped fuel the anti-immigrant fire already spreading in the country. To many Greeks, fighting austerity, and halting immigration remains the main pillars of reversing their country’s social and economic ills.

“Greece is a laboratory. They [the Germans] are making experiments with austerity and immigration control,” a forty-year old taxi driver said. The men I spoke to did not the support of The Golden Dawn, nor did they endorse the party’s violence against immigrants. Nevertheless, they were staunchly anti-immigrant. “I am not a fascist. We are not all The Golden Dawn. My grandfather fought the fascists during the war,” an angry young university graduate driving a taxi 15 hours a day five days a week told me. “Immigrants are not my responsibility. Immigrants are poor. They are starving. I am starving too. But I don’t steal. They do,” he said. “We have two problems here, the economic crisis, and immigrants,” a fifty-year old owner of a shoe-making factory who lost his business after the 2009 recession told me. “Immigrants are violent but the Greeks are peaceful people. They don’t belong here,” he said.

To its credit, Syriza moved against the mistreatment of immigrants in Greece immediately after its electoral victory. “Syriza takes a strong stand against the demonizing of immigrants and undemocratic measures like concentration camps and border walls,” said Vasiliki Katrivanou, the Party’s head of migration policy. Tasia Christodoulopoulou, the Alternate Migration Policy Ministry announced that the new government would grant Greek nationality to all migrants’ children that were born and raised in Greece. However, there are more serious challenges to radically changing Greece’s migration policy.

Falling two seats short from the 151 MPs needed for governing alone, Syriza was forced to form a coalition with right wing, anti-austerity, and anti-immigrant party, Independent Greeks. Although a small group in the Parliament, the Independent Greeks can pose difficulties for migration reform. To neutralize the far right, and change the public perception on migration, Syriza must succeed in delivering on its economic promises. Failure to turn the economic tide will make any noticeable change in public attitudes towards migration highly improbable.

Syriza also faces a large web of diverse groups in Europe that stand against loosening migration control in Greece and the EU. The far-right anti-austerity parties in Europe that embraced Syriza’s victory also support the harshest anti-immigration policies in the EU. “I welcome the monstrous Democratic slap the Greek people has given to the European Union,” Marine Le Pen, leader of the National Front Party in France said after Syriza’s victory. Liberty for the Europeans would not be possible with current immigration policy, she said.

In addition to far-right groups, Syriza must grapple with the strong anti-immigrant positions of the traditional European parties. Although occasionally criticizing Greece’s pushback policy, these and other statesmen continue to press Greece to be a gatekeeper of the European Union. “The border is open like a barn door,” Austrian Home Affairs Minister Johanna Mikl-Leitner said about Greece’s border with Turkey in 2012. “The question still remains what happens when a country is not capable of securing its borders, as we see in Greece,” German Justice Minister Hans-Peter Friedrich said.

“We should be able to punish, suspend or exclude from Schengen a failed state just as we can sanction a euro zone country which does not fulfill its obligations,” French Ex-President Nicolas Sarkozy said to a crowd of 30,000 people on March 11, 2012.

Can Syriza ride the anti-austerity wave among its supporters while steering away from the anti-immigration politics of Independent Greeks and the National Front, and the EU states? Will the new government continue the deadly pushback practices of the past decade? Will it shut down the abusive detention centers around the country?

Turning the tide of anti-immigration policies in Europe will be a historic humanitarian triumph. It will help Europe to live up to its obligations to the world’s refugees. A small country on the frontiers of the EU, Greece can potentially move the union towards a more humane economic and migration policy. Syriza must fight a battle on two fronts.

Behzad Yaghmaian is a professor of political economy at Ramapo College of New Jersey, this was posted here on TPPI with his permission.