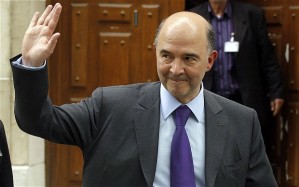 European Union Commissioner for Economic and Financial Affairs, Taxation and Customs Pierre Moscovici, talking with BBC’s “Hardtalk,” expressed the Eurozone’s determination to “do everything” to prevent a Grexit. As he said, Greece belongs in the Eurozone and the single European currency depends on Greece staying in the Eurozone. In return, though, Moscovici said the newly elected Greek government has to respect the country’s previous commitments.

“We believe that Greece’s place is in the Eurozone, the euro needs Greece and that Greece needs and wants to be in the Eurozone,” the EU Commissioner underlined, adding that “we feel that it is very important for the stability of the Eurozone and for the credibility of the euro that there is no Grexit. This is why we will do everything that is needed to avoid it.” He said that Europe has to respect the will of the Greek people in the election result and the Greek side has to honor the commitments made by the country’s previous government.

“We must address these issues in a quiet, peaceful and serene way. This new government has to say exactly what it intends to do,” Moscovici concluded.

It should be noted that yesterday’s meeting between Greek Finance Minister Giannis Varoufakis and Eurogroup President Jeroen Dijsselbloem in Athens was eventful. Varoufakis ruled out a further negotiation with the IMF/EU/ECB Troika, while on his behalf, Dijsselbloem insisted that Greece should stick to its reforms commitment.