Martin Schulz ended what will go down as the first visit of an EU official to Greece since the radical leftists stormed to power, saying:

“I hope that your wonderful country will remain on a European course as it always has.”

But the European parliament president made clear that while the two men had agreed “on many issues” there were “other issues and discussions that have to continue.” (Russia, perhaps?….)

He said further discussions with the new government in Athens would be based on the proposals the radical lefists will make (the government will outline its policy programme in parliament next week).

Schulz said he was enthused that the Tsipras government had made the crackdown on tax evasion a priority. The previous government had been very lax in clamping down on big fish tax evaders … partly because of so many of them were friends of those in the governing coalition.
Elsewhere….Evangelos Venizelos, deputy prime minister for the nearly three years the coalition held party, admitted this afternoon that the performance of his centre-left Pasok party in the poll was a “heavy defeat for Pasok and for me personally.” (Helena reports)

And that’s probably all from us tonight. Thanks again for reading and commenting. We’ll be back tomorrow… GW 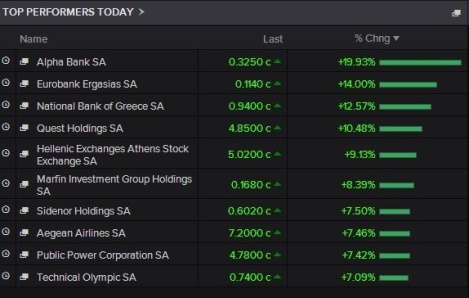 There must be sighs of relief on the Athens stock market tonight, after shares recovered some – but by no means all – of Wednesday’s huge losses.

The main index jumped by over 3%, having shed 9% in the previous session. Reassuring noises from Athens about working with Greece’s European partners appeared to help restore some confidence.

Bank shares led the risers, on the back of their worst day ever.
Biggest risers on Athens stock market, January 29 2015 Photograph: Thomson Reuters