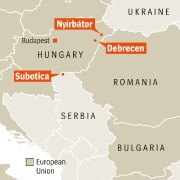 An Inside Look at EU’s Shameful Immigration Policy
By Maximilian Popp
4. Part: Hungary-Serbia
Hungary-Serbia
A shiver runs through the body at first, says Abu Naffa. Your hands and feet become numb, your nerves tingle and you feel dizzy. “The pills kill your mind,” he says. “You become a zombie.”
Naffa, a refugee from the Palestinian territories, spent half a year in an asylum prison in northern Hungary. He says the guards there gave the inmates Rivotril, a drug used to avert epilepsy and anxiety attacks and which is classified as a controlled substance in Germany, to keep them calm. The drug can become addictive very quickly. Naffa claims that security forces at the prison went from cell to cell at night and forced the migrants to swallow the medication.
PHOTO GALLERY

In 2011, the United Nations Refugee Agency (UNHCR) warned that Hungarian asylum guards were using drugs to sedate migrants. Máté Szabó, the human rights officer of the Hungarian parliament, says that 7,800 tablets of Rivotril, along with thousands of other sedatives, were given to 922 inmates at the Nyírbátor asylum prison within one year.
Szabó says conditions there are worse than in an ordinary prison. The refugees sleep on worn mattresses in cramped cells, and the lack of toilets sometimes forces them to urinate into plastic bottles. Migrants who need to see a doctor or go to a government agency are led through the town on a leash and in handcuffs.
Naffa is 22 but he looks like an old man; his hair is shaved around his ears and his teeth are brown stumps. Naffa runs his hand over pink scars on this stomach explaining that he cut himself with a razor blade when he was withdrawing from Rivotril. “I couldn’t live without the stuff,” he says.
No Functioning Asylum System
Hungary has no functioning asylum system. The few existing facilities are overflowing, so that many refugees are housed in former military barracks or community buildings that were converted into prisons for migrants. In April, more than 40 percent of all male asylum seekers were being housed in a prison. The reasons for arrest are arbitrary and unclear. As a rule, migrants are held for a month without having committed a crime. The UNHCR is critical of conditions in Hungarian asylum prisons, calling them “inhumane and demeaning.”
On a Saturday in May, several dozen demonstrators have gathered outside the Debrecen asylum prison on the Hungarian-Romanian border. They have come there by bus from Budapest to protest against their government’s treatment of refugees. Supporters of the right-wing extremist party Jobbik, wearing bomber jackets and combat boots, have taken up positions along their arrival route. Police officers are patrolling the site.
A few hours earlier on this Saturday, Abu Naffa was transferred from the prison to an open camp in Debrecen and he has now joined the protest march. “We want Europeans to know what is being done to refugees in Hungary,” he says. When the demonstrators reach the prison, inmates rush to the windows — men from Afghanistan, women from Syria and children. They wave white towels and shout: “Save us!”

Graphic: Hungary’s Hot Spots
Naffa left Gaza City and fled by land across Turkey and the Balkans and into the EU. After finishing school, he saw no future for himself in the Palestinian territories and dreamed of a life in France or Germany. His hopes were dashed when Hungarian police picked him up and locked him into a prison with many other migrants in the northeastern part of the country.
Naffa complains of regular abuse by security forces and says that many of his fellow inmates have become addicted to Rivotril, and that some have tried to commit suicide.
After coming under international criticism, Hungary eliminated the worst persecution of refugees in January 2013. But when the number of asylum seekers arriving in the country increased sharply, the government of Prime Minister Victor Orbán introduced a new incarceration regime half a year later. The primary purpose of the asylum prisons is deterrence, says Júlia Iván of the Hungarian human rights organization Helsinki Committee. They are intended to encourage refugees to avoid Hungary or continue migrating to Western and Northern Europe.
Those who do not leave Hungary voluntarily are often deported north to Ukraine or south to Serbia.
Migrants have set up a camp on the edge of a landfill in Subotica on the border with Hungary, the fifth-largest city in Serbia. Several hundred refugees, mainly from Syria and Afghanistan, languish there in huts made of plastic tarps and plywood. They eat food scraps found in the garbage and bathe in a pond. They are waiting for family members to send them money to continue their journey. Abu Naffa lived in the Subotica camp for a short time after Hungarian police officers had deported him.
Every week, Pastor Tibor Varga goes to see the refugees and hands out blankets, bread and aspirin. The pastor is one of the few people in the city who attend to the needs of the migrants. Varga parks his car in the courtyard of an abandoned brick factory, walks through tall grass and follows tracks on the ground. The camp is deserted on this particular morning. The ground is littered with clothing, telephone cards and cooking pots. A few days earlier, the Serbian police raided the site and arrested any migrants who were unable to flee.
Like other neighboring countries, the EU is also urging Belgrade to prevent refugees from approaching the border, hoping that Serbia can deter refugees from reaching Hungary. Frontex police officers patrol in the Hungarian-Serbian border region. The Serbian government introduced an asylum system in 2008, but only three people have been granted refugee status since then. “No refugee can live in Serbia permanently,” says Pastor Varga.
Most migrants continue northward after a few weeks. In his second attempt, Naffa made it to Austria unnoticed. The police detained him there and forced him to return to Hungary.
Now he is sitting in front of the entrance to shipping containers used to house refugees, looking somewhat lost. He says that the open camp to which he was transferred isn’t much different from the prison. Migrants still live in cramped conditions and guards patrol the cells. Now Naffa wants to try to reach Germany a third time. “The police can arrest me and beat me. I won’t give up.”
Europe’s ‘Disgrace’
According to the UNHCR, more than 50 million people were displaced last year, the biggest number since World War II. Developing countries accept nine of 10 migrants. A million Syrians currently live in Lebanon, a country with about 4 million people. In the EU, only 81,015 refugees from Syria applied for asylum in the last three years. Immigration to Europe is far lower than to countries like Lebanon, says Volker Türk, the UNHCR Director of International Protection.
Cecilia Malmström, the outgoing commissioner for home affairs, wants EU leaders to create more legal pathways for refugees. Until now, it has been all but impossible for people from poor countries to obtain work visas for the EU.
Equally slim are the chances of being admitted to a resettlement program, which permanently places refugees from acute crisis regions like Syria or South Sudan in safe countries without bureaucratic asylum proceedings. The UNHCR is currently seeking resettlement slots for 94,000 refugees. The United States recently accepted more than 50,000 people in the resettlement program, while the entire EU accepted more than 5,000 and Germany 300. Commissioner Malmström calls it “a disgrace” that Europeans are accepting so few refugees. “I am convinced that the EU member states must do far more to help people who are fleeing hunger, poverty and violence in their nature countries.”
The European Union has protected its borders until now. It ought to begin protecting people.