Post image for Manolada workers: ‘no Greek would want this job anyway’

As a Greek court frees the shooters and employer of 35 Bangladeshi strawberry pickers, the plight of Greece’s migrant workers is brought back into focus. 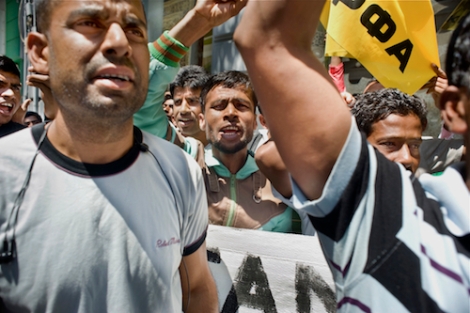 In the small Greek town of Nea Manolada, the smell of strawberries fills the air. Located in the region of Ilia in the western Peloponnese, a large number of enterprises occupy hundreds of hectares of land for intensive greenhouse cultivation. With a turnover of more than 90 million euros, strawberry production covers the largest part (up to 95%) of the Greek market, while 70% is exported to countries such as Russia, Germany and the UK, among others.

Idyllic posters of the plump red fruit can be found on every street corner, and spotting excessively luxurious villas is not a difficult task. In 2011, in the midst of Greece’s sagging economy, former “Socialist” Prime Minister George Papandreou praised farm owners for their bold entrepreneurial spirit and agricultural innovation. But at what — and most importantly at whose — cost is the so-called Manolada “miracle” sustained?

Inside a hot and stuffy tent, twenty-year-old Murad Alemir is wearing a towel around his waist, preventing a swarm of flies from sticking to his sweaty chest. The young migrant worker joins a crowd of ten others on the floor. Most of them are sleeping; others are eating strawberries. Like a sardine in a can, another man is lying on his side struggling to type on his phone. This is a typical Manolada shelter — a 30 square meters makeshift tent made out of plastic, cartons and bamboo sticks.

Lodging up to 25 strawberry pickers, temperatures in the tent rise up to 40 degrees in summer. There is no electricity, nor a sewage system. Three months a year, they shower and clean their clothes in a stream located behind the nearest gas station. The rest of the season, they use a hose that only functions two days a week.

More than 70 Bangladeshi workers live in this particular camp. There are about 25 similar camps, all close to the greenhouses where the men toil practically all day under conditions highly hazardous for their health. Following a fire breakout in one of the shacks in 2006, and statements by the regional fire brigade that characterized the workers’ accommodation as a “human rubbish dump”, labor and health inspections have been conducted several times — but nothing has changed since then.

Still, the workers do not wallow in self-pity. “It only took us four days to build it,” Murad says proudly of the camp. He guides us around the storage areas, “toilets” (simply a hole in the ground), their vegetable garden, and even a small praying space. As he kneels down, I notice buckshot scars all over his legs. Indeed, Murad is one of the survivors of a brutal shooting that took place last year. That, and nothing else, is the Manolada miracle.

Exploitation, blood and impunity perhaps best describe the grim reality behind the red-tainted fields. On April 17, 2013, three foremen of the area’s largest strawberry company opened fire on a crowd of striking Bangladeshi workers, leaving 35 wounded and several in critical condition, after the men demanded six months’ worth in outstanding wages.

The three shooters and their employer Nicos Vangelatos were arrested on charges of labor trafficking, illegal possession of firearms, and breaches of employment laws. On June 6, a court in Patras finally opened the case, with an elite group of the nation’s most notorious criminal lawyers representing Vangelatos and his foremen.

In the public debate surrounding the case, the shooters were quickly denounced as members of Golden Dawn, the neo-Nazi party that — despite a recent government crackdown — garnered the third largest vote in the recent European Parliamentary elections. In light of the shooting, however, Golden Dawn denied any involvement. Instead, the party leadership condemned the shooters for “employ[ing] illegal immigrants, depriving a living from thousands Greek families.”

As it turns out, anti-immigrant sentiment is prevalent in the surrounding area: just a 1o-minute drive from Manolada, a family-run hotel hands out swastika key chains to its customers. Many here are quite explicit in their views — even if they often present them with a twist. “I don’t have a problem with the migrants,” a young local from a nearby village says, ”as long as they don’t come near me.” Taking a casual drag on his cigarette, he adds: “They have diseases, you see, because they live with a lot of men.”

Manolada itself, a small town of around 2.000 Greek residents, is also home to some 4.000 migrants — mainly from Bangladesh and Pakistan, but also first-wave immigrants from Albania, Romania and Bulgaria. Most of them are undocumented, and they are either seasonal workers or reside there permanently.

As in much of Europe, Greece’s agriculture relies heavily on cheap migrant labor, and many here are employed under appalling conditions for measly wages (22 euros a day) — that is, when they do get paid. As shocking videos and witness accounts of the aftermath revealed truly degrading conditions akin to modern slavery, calls for a boycott of the “blood strawberries” soon began circulating online.

Wednesday’s ruling, however, exposed the true side of Greek justice. The court in Patras acquitted two of the accused — including Vangelatos, the employer — while the charges of labor trafficking were dropped. The two other men, the actual shooters, received initial sentences of over 14 and 8 years, but they were both conditionally released after appealing against the verdict, with the option of paying a five-euro fine per day instead.

Outside the courthouse, scores of migrants were seen crying in shock and disbelief at the ruling. “I’m ashamed to be Greek,” the migrants’ lawyer Moises Karabeyidis told the assembled media. But unfortunately, in a country already marked by rising xenophobia and impunity for perpetrators of racist attacks, the court’s decision does not come as a surprise.

Last year, government spokesman Simos Kedikoglou still denounced the shooting as an “unprecedented and shameful act [that] is foreign to Greek ethics.” Needless to say, these are the same “ethics” that drive Greece’s conservative-run government to violently crack down on immigrants: from the massive police sweep operation launched in 2012 — euphemistically named Xenios Zeus, after the ancient Greek God of hospitality — in which tens of thousands of undocumented migrants have been rounded up for abusive identity checks, to the subsequent detention of around 7.000 people in so-called “hospitality centers”, where they face up to 18 months in truly inhumane conditions (a recent law allows for this period to be extended indefinitely).

These are also the same ethics that drove the Minister of Public Order, Nikos Dendias, to complain about the “invasion” and “low quality” of migrants arriving to the country. When confronted with the Manolada case, however, Dendias promptly stated that “the exploitation of hundreds of thousands of our fellow human beings is not acceptable.”

According to the establishment logic, then, the exploitation of migrant workers is only deemed unethical and contrary to Greek moral standards when it reaches the most extreme level of attempted murder. Such overt crimes obviously need to be condemned. At the end of the day, however, these empty words are not enough to secure justice for the actual victims of abuse. Once again, the ones responsible for such shameful acts manage to get away with shocking complicity from the authorities.

The Manolada shooting is only the latest instance in a long history of racist violence against the area’s migrant workers. The most recent reported incident dates from 2012, when two farmers – one of whom is last year’s shooter – beat up a 30-year-old Egyptian, stuck his head in a car window and dragged him around for one kilometer. A similar attack took place in 2009, when two Greeks allegedly tied two Bangladeshi workers to a motorcycle and hauled them through the central square.

On two separate occasions in 2008 and 2011, journalists were viciously attacked and threatened by local farmers as they sought to report on the conditions of uncontrolled exploitation. As Dina Daskalopoulou, one of the journalists who broke the story, told the New Statesman:

When the owners picked up on our presence and what we were doing, they ganged up around us, started pushing us and yelling at us […] I was called “an enemy of the Greeks,” an “anti-Christian” and much more. The police, despite having full knowledge of the incidents there, did nothing. No district attorney took action, nothing, even when I was getting anonymous calls telling me “2.000 euros are enough to have you killed around here.”

The outrageous court verdict and the resulting impunity enjoyed by the perpetrators of racist violence has been described by many as a black day for justice in Greece. Meanwhile, the migrant workers who truly sustain the so-called Manolada “miracle” remain powerless in the face of economic exploitation, physical abuse and institutional racism. Their rights and dignity denied by the economic and legal system, the migrants’ only value to Greek society appears to be their unremunerated labor power.

Back in the camp, Murad discusses the pervasive sense of injustice the strawberry pickers face on a day-to-day basis. “They can easily come and arrest us,” he says of the local authorities, which have consistently closed an eye to the highly profitable illegal labor practices in the area. “They don’t disturb us because they know they need us.” Looking down at the bullet wound scars on his legs, he adds: “No Greek would want this job anyway.”

Tamara van der Putten is a medical anthropologist and former volunteer at the Greek Council for Refugees in Athens. She would like to thank the GCR and in particular Vassilis Kerasiotis, who represented the strawberry pickers in court, for his tireless dedication to the case and for making this photo-report possible. Any opinions expressed in this article are her own.

Piet den Blanken is a Dutch documentary photographer and photojournalist specializing in international migration. His work focuses on the lives and working conditions of those dwelling on the margins of society (website).