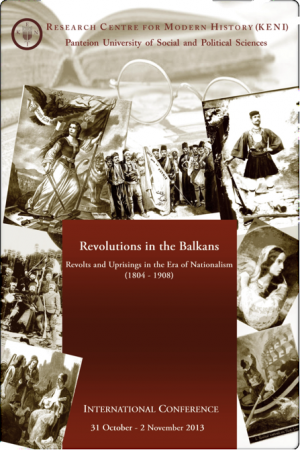 The hero of the Greek Revolution in Dionyssis Savopoulos’ music.

In late 1969 Dionyssis Savopoulos released his second album with the title A Fool’s Garden (ΤοΠεριβόλιτουΤρελού). Savopoulos had already emerged as a composer since 1966, when the release of his first album (The Van) established him as one of the foremost representatives of his generation in Greece. Savopoulos was a prominent member of the group that created the New Wave (Νέο Κύμα) scene in Greece, however in contrast to other representatives of this scene, he appeared to follow a path we could say more personal. His influences seemed to be closer to the trail which had been blazed in Europe and the United States by lonely troubadours, who combined political protest with a new style of interpretation. As a member of the democratic (1-1-4) generation Savopoulos perceived the messages of his times, so The Van is a kaleidoscope of its era, with the songs connected with the big political and social problems of the era, such as the Vietnam War or the defense of democracy.

From 1966 and the Van, to 1969 and the release of A Fool’s Garden, many things had changed in Greece, but also in what we might call “youthful music”. The most important of course, was the overthrow of democracy in the April of 1967. The dictatorship of the colonels had dissolved the youth organizations and political expression was a significant risk to any citizen and to a composer who wanted to convey clear messages through his work. Apart from the political situation however, in 1969 many things had changed in what we might call “songs of the youth” or “youth culture” in general. Savopoulos of 1966 is trying to be a Greek “Bob Dylan”, but Savopoulos of 1969 is influenced by the hippie culture, which is already evident from the album cover, a true work of pop art created by his friend from Thessaloniki, Stergios Delialis.

The LP A Fool’s Garden was released at the end of 1969 by Lyra Company. It consists of ten tracks, the last one of which, perhaps the most important, had the title “Ode to Georgios Karaiskakis”. Savopoulos therefore, chose to finish his album by making a song, which he dedicates to the hero of the Greek Revolution. But why do so?

This song has its own story. The composer chooses the person of the hero of the Revolution as a metaphor. A metaphor that allows him to get beyond the control of censorship and talk about a symbol of contemporary youth. Regarding the person hidden behind the reference to Karaiskakis, three opinions have been formulated. According to the first, Savopoulos is referring to Che Guevara, the Argentine guerilla who had lost his life in Bolivia during the autumn of 1967. According to another aspect, Savopoulos is referring to Alekos Panagoulis, who was arrested in the summer of 1968 after a not successful attempt to assassinate the dictator, Georgios Papadopoulos. Panagoulis was subjected to cruel tortures by the organs of the dictatorship and his brave attitude had turned him into a global symbol of democracy and humanism. There is also a third aspect, according to which behind the face of Georgios Karaiskakis “hides” Kostas Georgakis. At the age of twenty two the young student from Corfu put an end to his life in Genova (Piazza Matteotti), as a protest against the dictatorship in Greece. Certainly, when Kostas Georgakis killed himself, the album A Fool’s Garden had already been released, so it’s rather impossible for Savopoulos to have written the song about him. But one can easily guess that the song had a second “life” and that many listeners believed that it was related to Kostas Georgakis.

Whatever the case, the question remains. Why did Savopoulos choose the hero of the Greek Revolution to talk about a legend of contemporary youth culture? In order to understand his choice, we have to look how the propaganda of the dictatorship interpreted the Greek history and Tradition. For the Colonels, the Regime was a “Revolution” like the Greek Revolution of 1821. The dictators were trying to present the Regime as the political expression of a martial virtue of the Hellenic nation, which began with the Revolution of 1821, was carried forward with the saga of the Balkan Wars (1912-1913), continued with the resistance against the Italian troops of Mussolini during the Second World War, and finally ends up in the operations against the communist (as they call it) “danger”. The victories of the Greek army on the mountains of Pindos in 1949 were heralded as another critical moment in the history of the nation and presented as a continuation of the struggle for freedom, which began with the Greek Revolution of 1821.

Beside this, we should also add the need for the Colonels to emphasize the values of military culture, such as bravery or self-denial. In this context, we should also place both the constant invocation of the Revolution of 1821 and its heroes, and the also constant use of its symbols: Many war films were created with the full assistance of the government services, many of them on the subject of the heroes of 1821, such as Papaflessas or Boumboulina. The Colonels tried to build a big Church in Tourkovounia (near Athens) in order to fulfill the famous “Tama” (the Promise) of the Nation, so that the Dictatorship could be presented as the true heir of the fighters of 1821. Incidents of the Revolution are presented in a really “cheap” way to the crowds that fill the Kallimarmaron Stadium in Athens. And naturally, the Dictators do not forget to celebrate the 150 years since the beginning of the Revolution, with a series of events throughout 1971.

The propaganda of the Dictatorship constitutes the big frame. Within this however, we need to place smaller battles taking place, as for example the conflict between the Regime and the youth culture of the era. I have supported, in writing my second book, my view that for the Dictatorship a youth culture synonymous of subversion and revolution has been a great danger in the late 60s. Ioannis Ladas, one of the leading executives of 21st April, argued targeting at the youth of that time: “If you are not thrilled by Hellas as a concept, then what can thrill you? Mao Zedong or the young nihilists?” The revolutionary wave that shocked the western world in 1968 caused worries among the Colonels, who watched their values becoming outdated and obsolete for the new generation, both those which had their origin in military culture, and also more generally the ideology of “Hellenic-christianism”.

Savopoulos’ choice to use the hero of the Revolution as a metaphor must be seen exactly in this context in order to be understood. Savopoulos is one of the first composers in Greece, who tried to interpret the Greek tradition in a way that countered the dictators’. Dimitris Papanikolaou, a devoted historian of Savopoulos’ music, notes that this is done in a “homeopathic” way. The political song that is created once again in Greece after the shock of the early years of the dictatorship, tries to deconstruct the very symbols of the propaganda, the mass culture that the dictators foster, the large fiestas with the kitschy aesthetics. Against the junta propaganda and the constant invocation of Greek history, youth culture proposed an alternative interpretation. A return back to the roots, where the concept of “homeland” and “patriotism” served authentic values and not the purposes of the junta propaganda. Of course, this “return to the roots” interpretation concerned something much broader than just a song about a historical figure (here we should mention many editions of the history of Greek Revolution from progressive publishing houses, as well as collections of “Kleftiko songs” or the music experiment of Yannis Markopoulos who attempted to approach the folk song in a fresh manner and clearly different than the dictators did).

In the early 70s, this return to tradition and the alternative interpretation of Greek history was embraced widely by a young Greek audience. Contemporary youth music is not left unmoved and a number of artists attempt to follow the same route: in 1971 Thanassis Gkaifylias released the LP Hitchhiking (Ωτοστόπ) with the subtitle “Where are you going master ant” («Πού πας αφέντη μέρμηγκα»), an album with clear influences from the Greek folk song. In the album participated with four songs the group ANAKARA, a band from northern Greece, which was arranging traditional songs by mixing them with rock influences of the time. In 1972 a young singer, Marisa Koch, released her LPArabas, with exclusively traditional material. In 1973 the same artist released another album entitled Once in the nail and once in the horseshoe (Μιαστοκαρφίκαιμιαστοπέταλο), in which she performs once again rearranged traditional songs. The same year, the young duet Leda and Spiros, released their album Electric Evening Star (ΗλεκτρικόςΑποσπερίτης), where they attempt a folk-rock approach to traditional material (such as the famous song “Karagouna” or the classic Markos Vamvakaris’ rebetiko song «Τα ματόκλαδά σου λάμπουν»).

This entire effort to reinterpret and reclaim Greek tradition and history in a new way was a political act that ended up, in 1973, with the emblematic theater performance Our Big Circus (ΤοΜεγάλομαςΤσίρκο). The seeds for this effort had been sown by Dionysis Savopoulos already in his 1969 album A Fool’s Garden (ΤοΠεριβόλιτουΤρελού). In this record, one can also find the arrangement of a folk song, with the title “Dirlanda”, which in fact became later an international hit sung in France by Dalida, a famous singer of the sixties. In 1971 Savopoulos would release the famous LP Ballos (Μπάλλος), where the homonymous track performed on brass instruments, as well as the Balkan melodies, occupy the entire first side of the record. In 1972 he released his LP Dirty Bread(ΒρώμικοΨωμί), which contained one more emblematic song with the title “Black Sea” (“Μαύρη Θάλασσα”). During the same period, Savopoulos in his legendary performances at the Nightclub Κύτταρο (“The Cell”) invited on stage Domna Samiou, an eminent performer of traditional folk song and presented her to the young audiences, along with other popular folk heroes, such as Karagiozis (“Καραγκιόζης”) or Jimmy the Tiger (“Τζίμης ο Τίγρης”).

A few words as a conclusion. In the late 60s youth culture appeared to stand against the dictatorship and its main symbols. This dissent was not a quite open rebellion, but we know that it could not really be so. Instead it reclaimed and interpreted again symbols of the Greek History already used by the dictators with a totally different meaning. In this context, Savopoulos seems to be playing a leading role in what we could describe as national self-awareness. The significance of the song “Ode to Georgios Karaiskakis” is great, not only because Savopoulos invokes a symbol of the Revolution of 1821, which is the first time, something like that happens in a record of rock music in Greece, but mainly because he carries out a marvelous commentary on how a power or a crowd utilizes a legend. Georgios Karaiskakis, whose name is not mentioned in the lyrics but only in the title of the song, could be any legend constructed in absentia and after his death. So, the song has many layers of symbolisms, which operate at several levels. If we had to mention the biggest significance of the song, we could say that the allusive invocation of the hero of the Greek Revolution takes back from the dictators the legacy of ’21 and gives it, with a new meaning, to the mythology of resistance.