6th November 2012
11:00 am
Jan van Eyck Academie
Room 201
In the current economic and socio-political climate, there is an emergence and circulation of images related to the crisis.  In the form of photographic images, collages, headlines, cartoons and caricatures, these images, projections or representations appear on national and international press and television channels as well as on the streets, through independent media and the web. 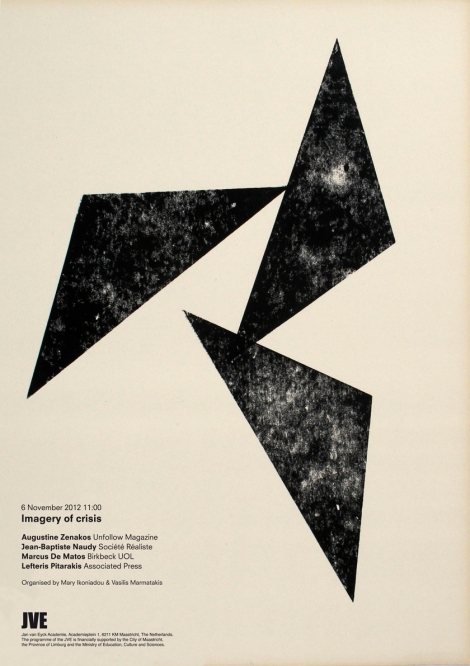 The Imagery of crisis conference will attempt to map the emergence of this imagery within the European Union. More specifically, we will examine the case of Greece through certain moments during the crisis and via specific images.
Greece – a country experiencing a state of turmoil as a result of the current financial and political crisis, has been in the forefront of this image production. Greeks have been subjected to contradictory portrayals on one hand of accusations, recommendations and judgments and on the other of empathy and pity. The image of the laid-back Greek has been replaced with that of the lazy Greek, the Greek tax dodger, the rioter or the poor victim. These projections (produced and re-produced both within and outside the country) entered the Greek public domain through discussions issues of national identity and sovereignty, racism and European integration. As a result, they have been creating new sites and modes of being for the Greeks, from re-evaluation and self-assessment to rage, depression and despair.
The Greek case is part of an ongoing production of Imagery of crisis within the EU. Moreover, the performance of these images leads to the construction of the others and of ourselves. Their power has the ability to define the dynamics of a group who can embrace, maintain or react against them. Thus the emergence of these productions is reforming the image of each member-state respectively and the image of Europe as a Union.
What are the political implications of this imagery? What is their impact on our European collective consciousness or unconsciousness? How will this imagery affect us and our imagination of the future within or outside the Union?
Augoustine Zenakos
Journalist, art critic and radio host. Co-founder (2005) and co-director (until 2011) of the Athens Biennale and editor of Unfollow magazine – a monthly independent publication on political analysis and cultural criticism.
Jean-Baptiste Naudy
Co-founder of Société Réaliste (2004-present), designer and producer for the Mad+off Fondation. Société Réaliste is a cooperative that works with political design, experimental economy, territorial ergonomy and social engineering consulting.
Marcus De Matos
PhD Candidate at the School of Law, Birkbeck College, University of London. He is a board member of FALE advocacy network, and his research in Law and Images is funded by CAPES Foundation, Ministry of Education of Brazil.
Lefteris Pitarakis
Photojournalist for the Associated Press and an advocate of ethics in photojournalism. He has covered the Palestinian uprising, has worked in Egypt, Lebanon, Syria, Jordan, Afghanistan, Iraq, Pakistan and the Balkan region. He has recently covered the Arab Spring uprising and the wars in Tunisia and Libya.