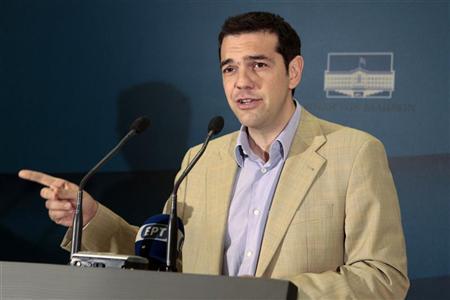 Originally published at Reuters.com
This is a reproduction

(Reuters) – Though it didn’t win last weekend’s election, Greece’s fast-rising radical leftist leader says his party has won the argument against the austerity measures keeping Greece in the eurozone and will inevitably come to power. “What Syriza has been saying all along is that the bailout plan is not viable and cannot go on,” party chief Alexis Tsipras told Reuters in his first interview since last Sunday’s parliamentary election. “Now they all recognize this.”

Indeed, the conservative New Democracy party won the most seats in the new parliament on a promise to push through spending cuts imposed by European authorities. But after the vote, party chief Antonis Samaras said the eurozone’s memorandum of understanding with Greece over its 130-billion-euro bailout should be modified. Tsipras, a charismatic 37-year-old former student communist, predicted that the newly elected Greek government would fail because it was based on “spent political forces”, paving the way for Syriza to assume power.

New Democracy and the centre-left PASOK party have taken turns ruling Greece since the country’s military dictatorship ended in 1974 and many citizens blame them for its current plight.

Syriza won 27 percent of the vote in Sunday’s election, up from 17 percent at a previous inconclusive election in May. That made it the second largest party behind New Democracy and delighted its supporters, who partied late into the night outside Athens University after results came in.

Relaxed and confident in his Athens headquarters, where the waiting room sports a portrait of revolutionary icon Che Guevara, Tsipras said: “Nobody else but us can carry out the deep reforms the country needs because we are not corrupt or worn out. Sooner or later, we will get this opportunity.”

Tsipras said Syriza’s rapid rise showed how Greeks were channeling their rage at the austerity measures – which have sent the economy into a deep recession and pushed unemployment close to 23 percent – into an alternative political movement.

Given public anger at Greece’s long-established parties, he added, “if Syriza didn’t exist today the alternative would be extremes, chaos and Golden Dawn,” a neo-Nazi party.

“We will prepare a lot better to exercise a much more combative and responsible opposition,” he pledged. “And, obviously, to organize to be able to claim government when the opportunity arises.”

Syriza’s key demands are for wealthy tax evaders to be taxed, and for what Tsipras calls “huge and unbelievable waste in the public sector” to be stamped out, by making it function more effectively.

“We have talked about the need to stop people collecting salaries for doing nothing, about reducing the number of ministers’ advisers and government officials by half, and curtailing MPs and ministers’ wages and privileges,” he said.

Tsipras said he opposed the terms of the bailout because it didn’t help ordinary Greeks who had suffered most from austerity and recession. “It is a bailout for banks and a sinking of the needs of the real economy and society,” he said.

Greek politicians have turned their fire on Germany for insisting on deep spending cuts despite the country’s deep recession and Tsipras had a special message for Chancellor Angela Merkel.

Merkel “must not insist on the mistake of austerity”, he said. “Europe cannot march on united if it continues to support these barbaric measures.”

Citing the spreading of the eurozone crisis to other countries as proof that Greece was not the root cause, Tsipras added: “All those people who said the problem was the lazy Greeks are now seeing the problems in Spain and Italy too. Something else is wrong.”

RAGE AS A WEAPON TO NEGOTIATE

Although Germany has resisted anything more than minor changes to the Greek bailout, a senior Eurozone official privately agreed with Athens. “Anybody who would say that we need not, and cannot renegotiate the (memorandum) is delusional,” the official, who declined to be named, told Reuters in Brussels.

Greece’s near-bankrupt government will run out of money next month unless it receives a fresh infusion of cash from international lenders. That will depend on the findings of a team of monitors who are due in Athens to check progress on the austerity program.

Asked about strategy after Sunday’s election, Tsipras signaled that Syriza would not call its supporters onto the streets to protest against the austerity measures. The bloc of 12 leftist groupings would instead focus its energy on creating “a shield of protection for those on the margins”.

“Solidarity and resistance are both important, but right now solidarity is the most important,” he said. “Our role is to be inside and outside parliament, applauding anything positive and condemning all that is negative and proposing alternatives.”

Clearly relishing his new-found international fame and his fast-rising popularity at home, Tsipras suggested his greatest moment was yet to come however.

“Greece needs courageous and decisive leaders who can use the rage of our people…as a weapon to negotiate for the benefit of the country”, he said.