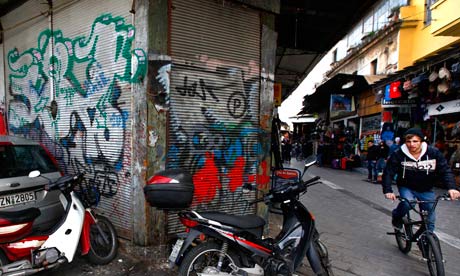 Closed businesses in Athens: young people have left in their droves after being unable to find work. Photograph: Yannis Behrakis/Reuters

More testimony and appeals from Greeks, at home and abroad.

First, two young professionals describe their disheartening circumstances: Ioanna Panagioto is a volunteer at Radiobubble, a community web radio station based in a buzzing cafe where I met a number of activists the other night. She lived in London for five years until 2008, doing an MA in marketing communications and working for Debenhams. “Since coming back to Greece I’ve had two short temporary contracts. I’ve been unemployed since July 2010 and have sent 300 CVs with no luck (including for positions in a warehouse or on a shopfloor). In the meantime I’ve managed to earn some cash by doing random odd jobs, but it’s devastating and disheartening when you’re unemployed because you’re forced to live with your parents, unable to make plans for the future. Having said that, I guess it must have been a shock for my generation – I am 32 – as we were raised with a career mindset, and now since everything has turned upside down we are working merely to survive. I would be lying if I said I am not considering leaving Greece again. Meanwhile, though, I look after the English section of Radiobubble News, which aims to communicate abroad what mainstream media would not cover, or give enough attention to – stories like the police making 60 preventive detentions before the big demonstration last month. We do live blogs on general strikes or demos, weekly news round-ups and breaking news. The live blogs include only verified information reported on twitter with the #rbnews hashtag. We have 25 Radiobubble contributors, and 50 other twitter users whose credibility has been tested. Our live blog on the three days of anti-austerity protests back in February got 15,000 hits, coming mostly from Spain, Italy, France and the UK.”

John Matzavrakos, who was educated in Britain, says young aspiring professionals in Greece – the 24-30 year-old age group, of which he is a part, have watched their futures go up in smoke. “I am 27 years old, and the co-founder of a web services company registered in the Netherlands (it would make more sense to have opened it here in Greece, but with the bureaucracy, red tape and corruption, it couldn’t be done.) This has been a part-time endeavour so far, but since my full-time employer filed for administration and liquidation a couple of months ago, we are planning to turn it into a full-time operation – and migrate in the process. Many of my friends and acquaintances, while young, are relatively successful in their jobs. Most were paid fairly well for Greek pre-crisis standards, at €1,500 a month or thereabouts, as I was before my employer collapsed. However, even those who are still employed would rather take the plunge and get out of here. They know that if their employer “suggests” they accept a €900 or less salary, there won’t be any argument against it. I’m not speaking on behalf of ‘lost students’ or ‘desperate pensioners’. I won’t mince my words here: the category where people I know fit in – aspiring professionals – has absolutely nothing to keep it in Greece. And this is perhaps the greatest tragedy of our times, not whether inflated pensions will be reduced, but this. It’s the crux of the matter.”

A social crisis, not an economic one

Andreas Kosmatis sends an extraordinary story of workers continuing to work for no pay in a bid to secure their company’s future in the face of official foot-dragging (and worse): in the north-eastern town of Komotini is a company called United Textiles. Its staff (of which Kosmatis is one) have been without pay for the past two and a half years, yet they are protecting their factories and supporting the company’s management in seeking a solution. “One year ago an American investment fund tried to buy United Textiles by buying up its debt from the banks, and then paying everything owed to the workers and suppliers, restarting three factories and using the other factories for new activities. It would have been an investment of around €250m, in a country where the government couldn’t find €300m and so had to cut pensions. The investor endured eight months of negotiation with banks and government, but finally gave up and left when a bank – a state bank that is – demanded more money, half an hour after the final legal documents have been circulated for final signatures. The story of these people is at the root of our problem. It is not an economic crisis, it is a social crisis: the part of Greek society responsible for development and growth just does not care. They are sitting comfortably, getting paid well every month and all they want is for things to stay as they are. Massive bailouts suit them just fine.”

The diaspora steps up

And Valeria Iliadou writes from the Netherlands, where she and other Greeks have founded a group to help people in their homeland. “We organise actions everyday in order to help people in Greece who are facing issues and economic problems,” Iliadou writes. “I know it is very difficult to produce via a single group. But I think when there is a strong will anything can be done. There are many things that can be done, especially through personal initiative, especially from young people who are hoping for a better future. This group wishes to be the beginning of a worldwide organisation that supports daily operations and all the Greeks, who now needed it more than ever. I would like to ask you to post our group to your page, asking everyone to join and contribute to our effort. We have perseverance and love for our country and we will do everything in our power to help any way we can.” The group has afacebook page.