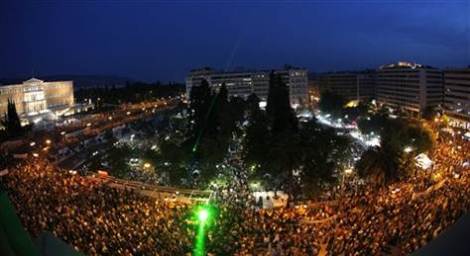 After months of attacks on the supposedly feckless Greeks, the western media, intellectuals such Amartya Sen and Jürgen Habermas and theUnited Nations have finally woken up to the fact that the catastrophic austerity imposed on Greece is unsustainable. It was about time. This is an unprecedented and morally odious type of collective punishment imposed on a majority of Greeks, who did not see a penny from the profligacy of their rulers and who live close to the poverty line.

The partial acknowledgment of the injustice and unworkability of the austerity measures came only after popular resistance and the peaceful revolt of the indignant scored its first major victory for the anti-austerity and pro-democracy campaign. Syntagma has placed a clear sell-by date on George Papandreou and the elites that ruled Greece for 37 years. The vote of confidence for the reshuffled government bought a limited amount of time, deferring its inevitable collapse. Offering to resign on Wednesday morning and, when his offer was turned down, offering the de facto leadership of the party and government to Evangelos Venizelos, his bitter party enemy, in the evening, Papandreou is a “dead man walking”. While most commentators believe the virtually bankrupt country must default and negotiate a substantial reduction of debt, the government keeps insisting that it will repay every last penny.

Syntagma has become Tahrir Square in slow motion. It is a peaceful, democratic revolt that was easier to start because the fear of brutal repression is smaller, but will be harder to complete as it faces the enormous might of the European Union and global finance capital. Now that the indignant have changed the rules of the political game, it is perhaps time to revisit some basic facts that have been seriously misrepresented.

1. The bailout of Greece is not a gift or grant but a loan bearing high interest. Crucially, bailout funds are not used to pay civil servants’ salaries and pensions, but to pay off debt held by German and French banks. According to IMF estimates, Greece will pay €131bn in refinancing and interest payments between 2009 and 2014, far more than the initial bailout loan of €110bn. In a magician-like sleight of hand, German and French workers are forced to bail out their national banks, not directly as in the 2008-9 banking bailouts but through the mediation of Greece, which inevitably becomes the target of populist outbursts. The Greek government, on the other hand, was ordered to provoke an economic and social meltdown unimaginable in western Europe in peacetime in order to receive the loans.

2. This unprecedented punishment led to an increase in debt and to permanent economic depression. The European governments now propose to offer a second loan, if Greece accepts an even more odious set of measures and sells off the family silver. Acceptance of these measures has been made a precondition for the payment of the fifth instalment of the initial bailout.

This is blackmail worthy of a backstreet loan shark. The privatisation plan includes the sale of 17% of the public power corporation, the engineroom of growth, which will remove the state’s controlling interest. Under the new plan, foreign emissaries will be assigned to the main ministries and the company set up to privatise public wealth. The market value of this stake is just €400m, because of the stock exchange decline. But the corporation owns 15 power plants and the budget for a new plant about to be built is €1.3bn. This post-Soviet style privatisation will pass valuable public assets to private hands.

3. The loss of economic sovereignty is accompanied by unprecedented attacks on the political and legal integrity of the country. IMF and EU inspectors visit the country on a regular basis, examine the records and dictate policy. Under the new plan, foreign emissaries will be assigned to the main ministries and will run the companies that will privatise the public wealth. Government capitulation is not enough. The European authorities demand that all political parties should accept the new austerity measures before the next loan instalment is paid. Surreptitiously, a new type of colonialism is emerging, in which the Brussels elites treat the European south as undeserving poor or colonial subjects to be reformed and civilised.

Although a small peripheral country, Greece had from the beginning special symbolic value for the European project. The word “Europe” is Greek, while the classical polis or city-state gave birth to democracy, science and philosophy and gave politics its name. Symbolic significance was an important consideration in the decision to admit Greece to the EU in 1981 despite the chasm between its economy and those of the northern core. But those were the days when the vision of a union of social solidarity and prosperity was still alive. Today’s vision promotes a neocolonial disciplining of populations.

The Greek people and democracy have become sacrificial victims similar to Euripides’s heroine in Iphigenia in Aulis. Iphigenia must be sacrificed by her father Agamemnon to appease the angry gods and set wind to the sails of the Greek fleet on the way to Troy. In the contemporary setting, the greedy gods are the bond markets with credit-rating agencies as their obscure priests. Saving the banks at the expense of the people is the object of the sacrifice and unfettered capitalism profits the contemporary Troy. Iphigenia eventually survived, miraculously rescued by a mysterious cloud, which replaced her with a deer.

In the modern Greek tragedy, salvation can only come from the magic “cloud” of the protesting demos that has occupied Syntagma and many other squares for a month. Standing below parliament, the Syntagma multitude has become the lower house or the parliament of the common people, confronting the paralysed upper house and adding popular participation to the failing principle of representation.

Athenian laws were prefaced with the statement Edoxe te boule kai to demo, “It is the considered opinion of parliament and the people”. On Tuesday and Wednesday, the two will be opposed as the demos, assisted by a two-day general strike, will try to persuade parliament not to enact into law the new tranche of measures. Whatever the outcome, direct democracy has returned to its birthplace and is changing the meaning of politics. The last few days proved that a multitude of free and determined citizens can successfully resist mighty powers. This is the promise and hope Athens offers to Dublin, Lisbon and London.