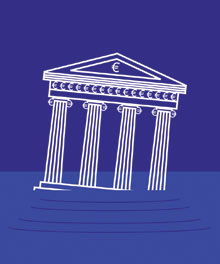 Your report on the Greek crisis (Don’t be surprised if Athens burns. And don’t be sorry, 20 June) reveals the nature of the crisis facing bothGreece and the UK.

The report contains the claim that: “Wealthy Greeks have always treated the country’s tax system like the church collection plate: what they give is strictly optional. This gap was covered up for as long as the Greek state could get cheap credit. The other problem covered up during the boom years was the rotting away of the industrial base.”

Our situation is similar. In Britain, both personal taxation of those on high incomes and company taxation could well be described as “optional”. The insufficiency of tax revenues to cover social expenditure without raising taxes on rich individuals and companies is at the heart of attempts to abolish state-funded social provision. Much of the industrial base of Britain has rotted away, in line with the theory that manufacturing is not a sound basis for a successful economy. This has gone alongside the promotion of the financial sector as being the key to economic success.

In Britain, also, personal and public expenditure has been expanded through the device of increased state and personal debt. The depiction of taxation as robbery and of public expenditure as being invariably wasteful, inefficient and unnecessary are central propositions of the neoliberal ideology now common to all major parties in Britain, and to those institutions promoting austerity measures and deficit-cutting.

Whether or not the means found of resolving the crisis in Greece will provide a useful example for Britain remains to be seen.

• The Greek financial crisis is just the latest symptom of the abject failure of politicians all over the world to address the disasters coming down the tracks towards us at 100mph. We need global democratic control of the financial system and spiralling corporate greed; the market must be our servant, not our master. We need distribution rather than growth, co-operation rather than competition, and we need to stop measuring ourselves by what we consume.

The 2008 banking crisis shredded any remaining doubts that the market, obsessed with short-term gains, will kill the goose that lays its golden eggs.Why must we rely on protesters to brave police batons and tear gas to point out the blindingly obvious; that solutions to these problems lie outside the politicians’ daily offerings of yet more versions of the status quo?

• I am appalled by the media’s coverage of Greek people’s response to the country’s financial and political problems. These were the most powerful demonstrations in the history of modern Greece, and they were peaceful. The demonstrators were equipped with determination and humour; they were carrying cooking pots – a hint as to how much poorer they were becoming by the day – not petrol bombs. People of all ages, people of all backgrounds, coming together every night, in their thousands, to send politicians an unequivocal message; the people had lost faith in them and their excessive and unfair policies.

However, it was not until 15 June, when violence erupted, that the British media decided Greece was newsworthy. The petrol bombs were at the epicentre of the discussion again, and people in Britain never really had the opportunity to hear that a different type of protest is possible; a protest that is unimaginably inspiring. Perhaps in a Britain, where austerity measures are just beginning to bite and people in the public sector are just preparing to strike, ignorance is bliss.

• No wonder that the greatest British songwriter of all time (Ray Davies) was quoted by José Manuel Barroso in his speech about emissions trading (Report, 20 June). As a college lecturer waiting to find out if I still have a job come September, another of Davies’s lyrics from Sunny Afternoon comes to mind: “Save me, save me, save me from this squeeze.”

• The failure yet again to grasp the nettle, that globalised finance as an economic idea is bankrupt, is only going to prolong the agony (Report, 20 June). The lesson learned from the collapse of communism as a viable form of governance should not be forgotten. Communism was found to be fatally flawed by the end of the 1980s, and globalised finance as an economic idea is found to be bankrupt 20 years later. Neither the politburo members nor the central bank bureaucracies could make a bankrupt system continue to function so that the nomenklatura could live in prosperity while others suffered.

• As the Greek debt crisis unfolds with ever-worsening consequences for the most vulnerable sections of the community, I fear it will only be when the wider ramifications of Greece’s economic collapse hit us here, in the breathtakingly complacent UK, that people will start to question the self-defeating austerity measures imposed by the EU and IMF. If the eurozone implodes in chaos and we start to slide into full-scale depression, I wonder at what point people will turn to poor old Gordon Brown, the forgotten man of the global financial crisis of 2008-09. For all his many faults, he did at least remember the lessons of the 1930s and he did “save the world”. Maybe time to hear from him now, before things get really bad.