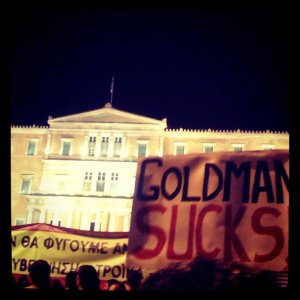 The only way to describe recent developments is Greece is to refer to a peaceful popular insurrection. The mass gatherings at city squares at the centres of all major Greek cities continue to gather momentum. On Sunday 5 June, Athens and most Greek cities experienced some of the biggest mass rallies in recent history. Hundreds of thousands of protesters in Constitution square in Athens, tens of thousands in Thessaloniki and many more thousands in most Greek cities. It is a unique experience of social mobilization and an original form of popular protest that combines the mass rally with a democratic process of discussion through mass popular assemblies.

What is more important is that these mass rallies and assemblies act as a point of convergence not only for people who have taken part in mass rallies, strikes, and social movements in the past months, in the big wave of social protest that followed the austerity program, but also for people that up to now refrained from mass action.

This movement is based on the collective experiences of struggle in the past year, such as the December 2008 youth explosion, the massive general strikes in the Spring of 2010, the big strikes in public transport in the Winter 2010-2011, the heroic struggle of the people of Keratea, a small town in the greater Attica region that for months fought with riot police, successfully opposing plans for an environmentally disastrous landfill in their vicinity. At same time people with no prior experience of struggle come forward in these protests, which are not simple imitations of the 15-M protests in Spain, but a much more widespread form of protest with deeper roots in Greek society.

This composition of the movement is an important change with past struggles because it makes even more evident the open crisis of representation and legitimacy that not only the PASOK government but also the whole political scene if facing. The social crisis, which the austerity program has brought along, is now turning into a political crisis. We have reached a point of rupture in what concerns the balance of forces. The successive waves of austerity measures that totally undermine decent living standards, the rise of unemployment and especially youth unemployment, the announcement of a complete pillage of state assets through a massive privatization program, and the general apprehension that there is no way out of the vicious circle of debt, austerity and deep recession, have alienated the vast majority of the population from PASOK and the political system in general. These mass rallies, with their openness and the fact that they look different than traditional union or party meetings, have functioned as an outlet for this anger and frustration. The people refuse to be governed in such a manner and the government is unable to govern them. This textbook definition of political crisis is fully manifest in Greece.

Youth has played an important role in the development of this movement, but it is not a youth movement. Youths have been instrumental in organizing the assemblies, in using social media such as facebook, in spreading the word, in volunteering for the organization of the rallies, but the rallies and the assemblies are a meeting point of all generations.

Although not very articulate in terms of traditional political programs, these protests are deeply democratic, radical and profoundly anti-systemic. They represent a strong desire for political change, the demand for safe employment, dignity for labour, authentic democracy, and popular sovereignty against the attempt to implement measures dictated by the EU, the IMF and the ECB. They reject the current attempt for an extreme case of neoliberal social engineering that the Greek government and the EU-IMF-ECB ‘Troika’ has been trying to implement, perhaps the most aggressive case of attack on social rights that a European country has experienced since the ‘shock therapies’ in Eastern Europe in the early 1990s. Even the mass use of Greek flags in the rallies, a practice that some segments of the Left misread as ‘nationalism’, is an expression of the need for popular sovereignty, social cohesion and collective social dignity.

However this movement has at least one central demand, namely that the Medium Term Economic Program (the updated version of the “Memorandum of Understanding” with the EU-IMF-ECB “Troika” which includes even more aggressive measures) is not put to vote, along with the demand to immediately put an end to all the policies dictated by the EU and the IMF. This is accompanied by the refusal of people to pay for a debt that they did not create. “We do not owe – we shall not sell – we shall not pay” has been a very popular slogan in posters or stickers. Contrary to the constant ideological blackmail by the government and the mass media that “we all ate it together”, people have realized that the reasons for the Greek sovereign debt crisis are not public servants’ salaries or social expenditure but tax breaks for big business, overpriced public useless public works (such as the one for the 2004 Olympic Games), high military spending and last but not least the participation in the monetary and financial straitjacket of the Eurozone. That is why the demand for an immediate stoppage of debt payments and the annulment of debt is one of the unitary points of reference of people, along with the rejection of austerity and privatizations. It is also worth noting that contrary to a traditionally strong pro-EU popular opinion more and more people are beginning to question the participation of Greece in the Eurozone and the withdrawal from the euro is being openly discussed by people, instead of being rejected in advance, as it was the norm until recently.

Politically this movement is united in the demand that “they must all leave now”, in a rejection not only of PASOK but of what is perceived as the political establishment. That is why there is a strong appeal in the ‘collective imaginary’ of this movement of the images from Tunisia, Egypt or Argentina and the humiliating departure of prime ministers.

It is worth noting that if we look at whatever is happening in Greece, along with the ‘Arab Spring’ of victorious popular insurrections and the new qualities of social contestation exemplified in the British movement against cuts and high tuition fees, or the occupation of the Capitol building in Wisconsin, then we can see the first signs of a new historical phase, marked by the possibility of insurrectionary events.

It is true that this movement has been extremely suspicious of traditional party politics, a suspicion also directed against the parties of the Left. But to pass judgment on this anti-political stance, we must also take into consideration that for the majority of Greek people party politics is associated with unjust neoliberal policies, media manipulation, corruption and close links to big business and lately an almost servile stance towards international organizations. In light of the above, one can say that this ‘anti-political’ stance is exactly the foundation of an authentic process of radical politicization, the beginning for an alternative politics of collective action, direct democracy and radical social change.

That is why on the squares of Greek cities we are witnessing a unique experiment in democracy. The mass assemblies, with their very strict rules of equal voicing and collective decision that leave no room for traditional demagogy, offer an alternative paradigm of the collective processing of political demands and strategies. At the same time, they are also a new paradigm of collective self-organization and solidarity. If the forms of a potential ‘dual power’ must always be the result of a process of collective inventiveness, then we are experiencing the beginning of such a process.

The attitude of the Greek Left has been contradictory. In the beginning there was widespread scepticism, the result of a long tradition of treating social movements as the result of political or party initiative and design. Especially, the Communist Party (KKE), which despite the strongly anticapitalist rhetoric is always suspicious of movements it does not control and has an increasingly sectarian tactic, has insisted that the movement is not ‘political’ enough. Other tendencies of the Left, such as SYRIZA (Coalition of the Radical Left) or ANTARSYA (Front of the Anticapitalist Left) have voiced their support to the movement, but have treated with unease this combination of a mass movement with the rejection of traditional left-wing verbalism.

The Greek government is trying to move along with the measures, despite the loss of any legitimacy. At the same time, the other European Governments and the EU mechanism act as if this is not happening. However, I think that they cannot hide their anxiety. It is obvious that any attempt to implement these policies will only lead to making the situation even more explosive. At the same time, they fear that any reversal or delay in implementing the austerity measures can have destabilizing results all over the EU. That is why their main aim is to pass the Medium Term Program through Parliament in return for a new loan package. They know that the PASOK government will not be able to stand the pressure of social anger and unrest, but they hope that this way they will bind any future government. That is why they press the conservative New Democracy party to offer its support to the measures and to help create a climate of consensus. So far, New Democracy has avoided openly supporting the government, but at the same time it has tried to calm the representatives of capital by presenting its own extremely pro-business program.

In light of the above, the most urgent and immediate aim of the movement is to escalate protest in such a scale that it would be impossible for the government to vote the ‘Medium Term Program’, probably by resigning in the face of social protest. The fall of a government under the pressure of social unrest would open the way for greater social and political change.

In such circumstances the Left does not have the luxury of simply articulating the demand for resistance. The very development of the movement creates conditions for a potential social alliance of the forces of labour with youth and other segments of the subaltern classes, it opens the way for the emergence of a new ‘historic block’. At the same time the open political crisis and the possibility of a government falling under the pressure of the movement marks a whole different conjuncture in what concerns the relation of the Left to political power. The Left has the possibility to emerge again as a counter-hegemonic force, provided that it abandons both the reformist illusion of a potential ‘progressive government’ and the sectarianism of traditional leftist verbalism, and that it combines mass participation in the movement with a concrete set of transitory demands such as the Immediate Stoppage of Debt Payments and the Annulment of the Debt, the exit of Greece from the Eurozone and potentially from the EU, the nationalization of Banks and strategic infrastructure and the radical redistribution of income in favour of the forces of the labour, demands that offer the possibility of an anticapitalist alternative.

What we are experiencing is history in the making. Let’s hope that the outcome will be the reversal of the policies of neoliberal social destruction and the opening up of the possibility of radical social and political alternatives.

*Department of Sociology, University of the Aegean, psotiris@otenet.gr

6 responses to “Days of unrest and hope”